Posted on September 30, 2020 School benefits from a new pedestrian crossing

A new pedestrian crossing has been installed in the past few months, helping families with the walk to St George’s CE VA Primary School in Langton Matravers. 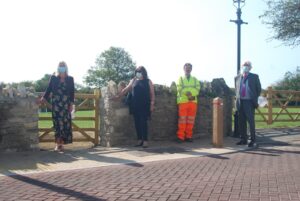 It’s also helping the children carry out their ‘Mile run’ exercise safely, which used to be carried out in a field at the rear of the school. When the field became unusable, the school faced the additional challenge of taking the children across the busy road to use the dedicated school playing field, which is also the emergency evacuation location for the school.

As the road didn’t qualify for a formal Zebra crossing, Dorset Council’s Highway team came up with an alternative, following discussions with the school and the Parish Council.

There is now a raised table with coloured/raised surfacing, which has made the crossing much shorter and safer.

The crossing cost £40K and will greatly improve safety for families with school-age children – plus pedestrians generally – as well as helping the school children cross the road to their playing field.

The crossing has been a huge success according to Helen Wemyss, the Head Teacher of the school.  She says: “We can now take the children across the road safely. We were previously unable to see oncoming traffic from the kerbside clearly, so it’s given us much better visibility. Aligning the new gate with the exit from the school means that we are able to get the children across the road much faster than before.”

Cllr Ray Bryan, the portfolio holder for Highways, Travel and the Environment stated: “This is a good example of what can be achieved by working together to find solutions. Not only does it provide a safe crossing, but it also supports the healthy living agenda for children in the school and residents of the village.”

Cllr Cherry Brooks, Lead Member for Highways and Ward Member for South East Purbeck, which includes Langton Matravers, says: “It was important that we found a solution that protected the school children, but this has gone further than that. This crossing can be used by all local residents and has been designed and constructed in a way that is really sympathetic to the conservation area. It is a testament to the close working of Dorset Council, the school and the Parish Council. We also offer our thanks to the residents of the village and surrounding communities for their patience during the works.”

Cllr William Knight, added: “The new crossing provides a safer route for children and families to access the playing field and its recreational amenities.”